I am reposting another version of the classic pasta with tuna – one that can’t be made in a hurry and that requires a little attention to detail in the prepping phase.  Definitely worth the trouble, however, if you have the time and inclination.  I wrote the post in December 2014, that’s quite a while ago !

It is very traditional to have a fish-only themed menu on Christmas Eve in most parts of Italy, including Rome.  Also traditional are foods fried in batter such as artichokes, cauliflower, broccolo, apples, cod fish etc.  Spaghetti alle vongole (spaghetti in a clam sauce) are always a big hit.  And so is pasta with tuna – not fresh tuna but tuna packed in olive oil.

I stopped buying tuna a few years ago, after reading about the parlous state of this particular fishing industry.  I don’t want to sound all holier than thou over this decision and I am sure I am not the only one.  However, I also keep an optimistic attitude and look into reports on improvements (in Italy’s Mediterranean waters at least) and it would appear that the numbers of tuna have grown to the point that I can now resume eating it without feeling guilty (and being careful, of course, to choose the right brand).

The photos on today’s post were taken at the end of last summer, the tuna being a present from friends who had just returned from a holiday in Puglia.

This tuna was A-star stuff, packed in proper olive oil and not some other substandard seed oil, and presented in a glass jar.

Some tomatoes, a couple of cloves of garlic … and my new kitchen ‘toy’ – a tomato peeler.

A couple of anchovy fillets … and some lemon zest (for freshness).

Chop and de-seed the peeled tomatoes …

Cook the garlic (careful that it doesn’t burn, it must cook until it is golden).

Add the tomatoes to the frying pan … 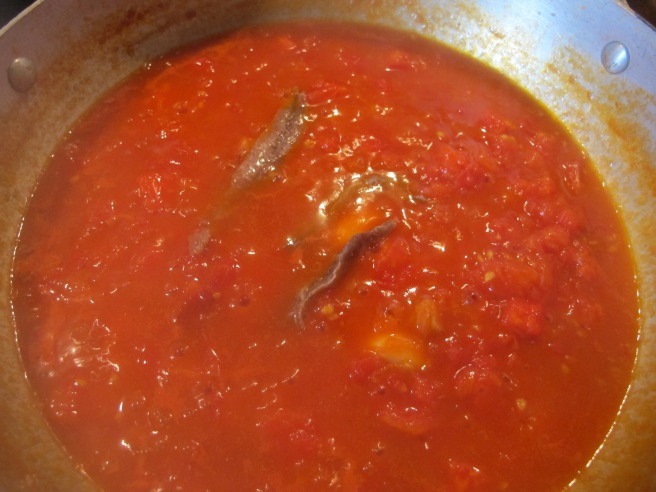 After a few minutes, add the anchovy fillets …

Taste … and add a pinch of sugar if necessary.

It won’t take more than 10 minutes to have this sauce ready.  At that point, add some torn basil leaves and the lemon zest.  Switch off the heat.

Sssssh … don’t tell anyone but I didn’t do such a good job of de-seeding the tomatoes.  Never mind.  I am still alive. 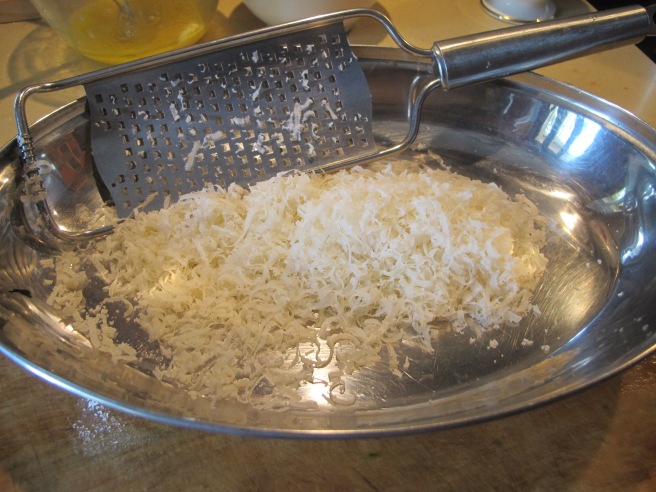 Grate some pecorino cheese.  I think anyone who has been reading my blog for a while is fully aware of my reluctance to engage in cheese grating which is why I do my level best to fob this job off to any other family member or friend who happens to be in the vicinity.  It is important to have someone else grate your cheese for you, yes … but it is also important to make sure that the proper sized cheese grater is used.  See the photo above? The holes in the grater are too big … the grated cheese is not ‘fine’ enough for a pasta.  The finer the cheese grated, the easier it will be for the cheese to ‘melt’ completely into the sauce.  I know it sounds silly but it makes all the difference. 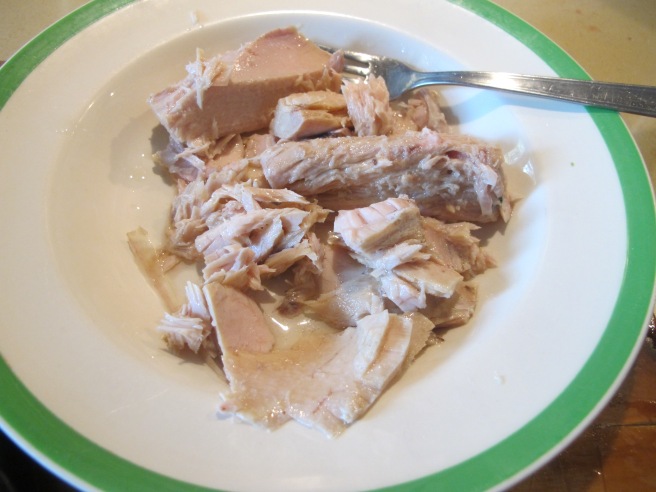 While the pasta is cooking … drain the tuna.

When the pasta is just about cooked, transfer it it to the pan with the tomato sauce.  Turn the heat on again and allow the pasta to finish its cooking time directly in the sauce.  If the sauce looks like it’s going to dry out, add some of the cooking water. 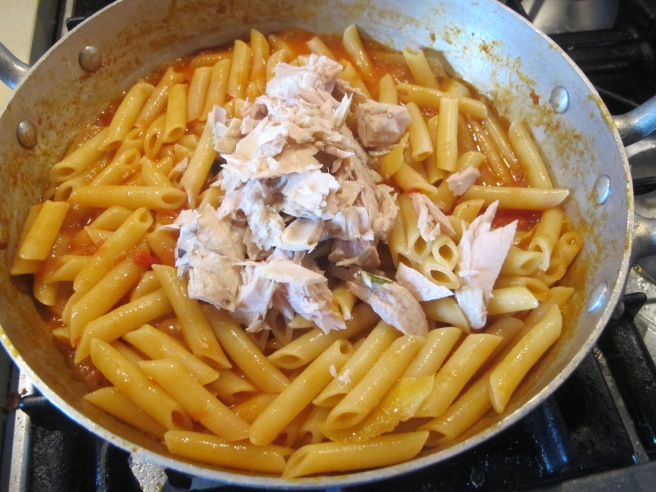 Combine all the ingredients and switch off heat.

The green bits are, I think, a mixture of mint and marjoram.  Parsely would be great too.

It is not ‘normal’ in Italian cuisine to mix cheese and fish together.  This recipe is one of the exceptions.  As is pasta with mussels and pecorino.