My mother in law Maria hails from a small hilltop town in the Marche called Monterubbiano.

When my father in law retired, he bought a house there which became the Summer Holiday go-to venue for me and my husband and our kids for several years in succession.

There comes a point in children’s lives when they feel it’s no longer ‘cool’ to spend holidays with their parents and sure enough, that happened with us too.  Even so, Monterubbiano maintains an iconic status in the vault of family memories, and always will do.  So many outdoor dinners, friends and family gatherings, laughter and silliness and looking forward to future frolicking.

My in-laws leave Rome some time in May and stay in Monterubbiano until early September, sometimes very late August when the weather there can change sooner than it does in sunny Rome.  Monterubbiano can get very ‘foggy’ in no time at all, even during the Summer, not to mention unseasonably chilly.   It is close to a mountain range, after all.

The view from our bedroom early one September morning … foggy.  When our daughter was little she used to call it “il fumo della pioggia”, the smoke of the rain.

Monterubbiano’s signature food dish is the “tagliatelle fritte”.  These are fettuccine cooked and seasoned with a bechamel and cheese sauce, then shaped into a ball, breaded and fried.  They are served with a tomato sauce.  One ball per person is enough, let me tell you, they are indeed very ‘rich’ !

My husband and I adore the sea and there was no way we would have spent so many weeks in Monterubbiano, Summer after Summer, if it wasn’t within easy access to the sea.  It is a twenty minute drive away from the town of Porto San Giorgio.  An Italian singer called Piero Focaccia came out with a song in 1963 that says, “For this year, don’t change, stick to the same beach, to the same sea, and come back to me” (https://www.youtube.com/watch?v=qvaCyff7Jn4).  This attachment to “sameness” is a concept that non-Italians will perhaps find difficult to appreciate but is a way of life that is deeply imbedded in the culture (or was rather, things change, even in Italy.)  When my daugher was just one year old, we sought a beach that was relatively “quiet” and off the beaten track, not too crowded etc.  When I say beach, I mean a beach with with the usual frills and accommodation that are a staple in Italy: sun beds, sun umbrella, drinks and a loo/rest room (facilities that make life very civilised to my mind).  They call them “chalets” there, just as one has chalets up in the mountains.

Anyway, to cut a long story short, we espied one of these chalets just opposite a convent and that did it for us. Some of these chalets can be very ‘cool’ places for young people to throng about, as they strut their stuff and put music on and generally do what young people enjoying life do: make a lot of noise, laughing and joking, smoking and canoodling.  We presumed that no young person worth his or her salt would be seen dead within walking distance of a convent and we were right.  This was a family place, with not just parents but grandparents too.   The gamut of generations ran from nappies to bikinis to sun-dresses and included a forgiving attitude towards bulge, fleshy flab, deeply lined facial expressions, paunches, stretch marks, and many a leg heavily laden with varicose veins. Perfect.

It is still called “Bagni Giuliana”. The owners, husband Cavicchi and wife Giuliana, were so accommodating and pleasant and kind that we returned to them the following year.  And the one after that. And then the one after that one too. In other words, we never changed our chalet and the writer of that song would be proud of us.  We are welcomed like family when we return, they have literally seen our children (and their friends when they came with us) grow up.  And we, unfortunately, have seen Mum and Dad die, although we are pleased that their two daughters continue to run the place (which was thoroughly modernised about 20 years ago).  The pull of the familiar can never be underestimated.

Anyway, as life cracks on for my mother in law, her body has begun to show cracks of its own.  Two knee replacement operations make it hard for her to walk properly now but the real reason for this unsteadiness is that Alzheimer’s started its unwelcome inroads on her health.  She is ever more forgetful now, and often gets confused, or tells a story over and over again.  Fortunately, she continues to be a good story teller, and her innate kindness, sense of wonderment and impish naughtiness (her motto? “God save us from the virtuous” – Dio ci salvi dai virtuosi … ) continue to attract young people to her.  She may not have been the best home cook in the world but she certainly was a jolly good one and that’s where the sadness sets in.  Basically, she cooks no more, and I know that my father in law suffers for this.  Not that he would ever complain, he is too proud.  That generation never would – their complaints are lodged in other fields of human interaction.  He makes do, buying nice cheeses and cold cuts, and making a basic pasta for himself.  Or buying ready-cooked veggies and  rotisserie chicken.  He won’t die of hunger, oh no.  But he, like me!, lives for his food, for a decent meal and it must hurt so much not to be able to enjoy a ‘decent’ home cooked meal on a daily basis.  Especially since he spent all his life with his wife making him one.

Dear Reader, I can’t tell you what pleasure it was for me to cook a decent meal for him when we went to visit them last Summer in Monterubbiano.  It gives me so much satisfaction, the kind that only another home cook will understand.  It’s all about making people happy, even if a grunt is all you’ll get out of them on occasion.  It’s about the joy of seeing someone reach out for another helping, just a small one, and then another, again – just a small one.  Of seeing them studiously mop up the sauce on their plates with a bit of bread. Oh hearing them sigh and exclaim that they couldn’t possibly eat another thing, they’ve eaten so much already (true, very true). And then seeing them fall asleep, head nodding, on the sofa as they pretend to watch a bit of telly afterwards.   Of their face when you ‘force’ leftovers on them to take home in batches of plastic containers that you’ll never see again (who cares!).  Eating is all about evanescence.  A lot of work and trouble growing/making food and then pouff! it’s gone in a few moments in the eating.  The pleasure principle of it all.  A huge big fat Zen lesson there, surely?

Anyway, last Summer we visited Maria and Giose on a number of occasions, all of them poignant for the above and other reasons.  One of Maria’s best friends there, Liliana, is a brilliant cook and organises mega dinners for the town al fresco.  All the proceeds go towards the upkeep of the local football team.  If you have the time, I’d like for you to watch a wee video I took of a dinner she organised.  Plastic plates and plonk for wine, but really good food I tell you!  All for the magic price of Eu 10 per person.  With a local live band.  The guy playing the trumpet? Enzo.  Always cracking jokes.  He is the retired owner of the town’s only grocery shop and played a surprise Serenade for me and my husband the year we got married with a bunch of other musicians at around 2 a.m.  The much appreciated serenading was followed up by sandwiches and jugs of wine and hearty snacks all organized by my in laws.  The lady with the walking stick is my mother in law, Maria, being escorted by my husband, her son, Pino.

We returned one last time early in September, in time to celebrate my father in law’s birthday.

My birthday present to him?

Lots and lots of sauce for making pasta.  And the sauce in question was made from the Coda alla Vaccinara recipe.  I’ll write about it in the very next blog. 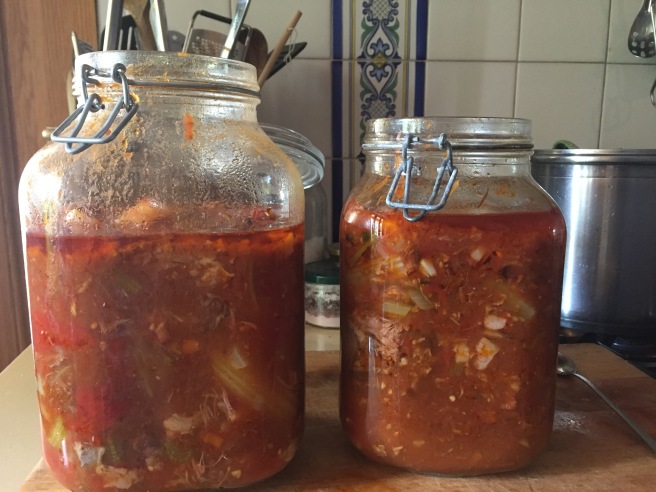